Next up on the calendar was another pro flagging event: the NYC E-Prix in Brooklyn, NY. I had heard good things about this event last year, and decided it would be a good way to dip my toes in the world of FIA open wheel racing. I have friends who flag at Formula 1 events, and based on the stories I hear and what I imagine from them, I’ve always been a bit intimidated to try my hand at flagging them. Any time I come up on formula racers at SCCA events, I always find them difficult to identify – all you see is a nose and some indeterminate colors, and rarely can you see a number. Blue flagging a race can be a real challenge with that. So how better to see if my fears were real than to sign up for the Formula E race, and play a small part on some hugely experienced marshal team?

I signed up and was set for my adventure, safe in my anonymity, but then I got some emails that gave me a shiver. “You are receiving this email as you have been selected to be a post captain for the 2018 Formula E-Brooklyn race.” Gulp. Captains are supposed to know what they’re doing – they’ve obviously made some sort of mistake. I reached out to some of my more experienced flagger friends who were attending, and told them what had happened. The general reaction was along the lines of “You’ll do fine”. Oh, then alright. I tore into the materials they had emailed us. Decided it was pretty safe to skip the parts where it described how to build a car, and went right to the flagging rules and intervention descriptions. As a newer flagger (started in 2009), I’m definitely part of the post-intervention era in flaggers, and don’t have a lot of experience in attending to disabled cars, and especially ones with wings, and huge batteries/electrical shock risks like these. They provided a movie to show you how to assess and handle a car in the event of an accident (hint: there are multiple lights on the cowl to indicate whether a car is good (green), the electrical system has become unsafe (red or no light), and whether the drive sustained g forces sufficient to warrant a trip to medical (blue light)).

The schedule for marshals was excruciating, too: buses departed hotels at approximately 5am on Saturday and 6am Sunday, only to have a session at 7:30a on track, then have massive amounts of downtime since there are no supporting series in attendance, and batteries require time to charge!

My station, and my fellow marshals, turned out to be great. We faced the harbor, and had the Statue of Liberty across from us in the distance. In addition, the Freedom Tower was just off to our right. The podium, and all its ceremonies, were right behind us (we kept our gear out of the sun and rain by keeping it under the stage). One of the bigger surprises was that they staged the cars right in front of our station, so we got to watch the grid walk activity happen right in front of us. Saturday I was just in awe of being so close to the action, but on Sunday Liv Tyler, who earlier had done some demo laps in the Formula E spec car, poked her head into our cutout to pose for a quick selfie with one of my teammates. She smile at me and all I could do is smile back, star struck. 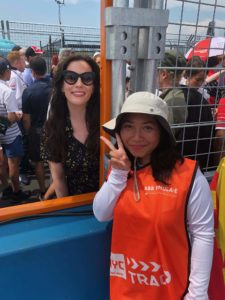