The weekend of June 15 & 16 brought some new highs and lows for me. MoHud flag chief Rich Alexander and I offered to co-chief this event to help cover for NER’s current flag chief, who is busy planning for her upcoming wedding. This was a good opportunity to expand my experience in Control that I started this year at the Palmer event, and I was looking forward to the challenge. Rich had me go through the exercise of staffing stations, and he had also lined up another control person to help mentor me on the art of communication. I’d learned a lot my last time at Palmer (especially what NOT to do), and felt up to the challenge.

It was pretty chaotic in control – we had our usual radio issues, and if you’ve ever worked race control before, you’ll know that clear and quick communication are critical to making a race go smoothly. We ended up renting Lime Rock’s radios and had a good day Friday. The “Paddock Crawl” portion at the end of the day is always a fun time. Racers and organizers alike bring various foods and beverages and offer them to folks who wander around from place to place. I had some very good food, and Mohawk-Hudson’s very own Team Bucci has become pretty good at putting together a great chip, salsa, and margarita station.

Saturday dawned and the event was once again marred by ongoing radio issues. We couldn’t hear some of the stations, and everyone became pretty frustrated. We did our best to carry on with the event, but before we got to lunch I experienced a pretty serious vision issue. Unfortunately I needed to get to an ophthalmologist ASAP, so my friend Rich took me back to Albany. As it turned out, I had a small bleed in my eye that cleared up somewhat within hours, but it has left a ton of floaters in my left eye and some odd noise I constantly see. Nothing I can’t overcome, but it was scary when it happened.

As always, we were a bit light on flaggers, but the quality of those individuals who came out meant there was a lot of experience on stations. My most memorable moment of the event was while working outpost at Station 1, which means I was across track from the flagging post at Turn 1 at the end of the front straight (aka “Big Bend”). While the Sprint X race was happening, I happened to have what I found out to be a Ginetta roll off the track and down the runoff area, pulling up next to me. Watching the race later on the DVR, I found out that the #24 of Frank Gannett got jumped by the #50 of Preston Calvert in the Downhill, and it apparently broke something in the suspension that was highlighted when he went to brake coming into Big Bend. I eventually got Frank to move the car down to the end of the runoff and him out of the car. He came up and joined me at my post, and we chatted while watching the race progress. We talked a bit about his incident, and he mentioned he wasn’t sure if he was leaking anything. I just happened to glance at the pavement where he first stopped, looking for signs of moisture, when I noticed something black on the pavement. The item was undulating, in a very snake-like manner, and thus we figured out pretty quick it was a snake headed our way. The real question was what kind of snake? LRP is famous for having some ornery rattlesnakes around, and that thought became foremost in my mind. As it got closer – 20 ft, 15 ft, 10 ft – it became pretty apparent that a) it had a small, but very articulated viper head, and b) it definitely had a diamond pattern on it, although the color was dark gray, almost black. The rattlers I’ve seen are usually tan or brown in color, being western rattlesnakes, so I wasn’t sure about an eastern rattlesnake. Turns out it was a Timber Rattlesnake, and s/he appeared to be making a beeline for our position. I mentioned the possibility of a visit to Mr. Gannett, which prompted him to tell me a story about gators at Moroso Raceway in Florida. In the short time that story took, the snake was now about 8 ft from us. “If it gets any closer, you and I are getting up on this TV stand” I told Frank, and he agreed it sounded like a plan (this is why I loved Frank – he was personable, pleasant, entertaining, and he didn’t give me any grief about missing the race). Just as we decided to move, the snake took an abrupt right angle turn and decided to disappear into the tirewall directly in front of us. I was relieved initially, but now I realized I couldn’t keep track of where it was and kept looking down at the end of the tirewall to make sure it didn’t change its mind.

Before we knew it the race had ended and the tow trucks were coming to pick up Frank’s car, so we said our goodbyes. It certainly gave me some good flagger story material to tell. 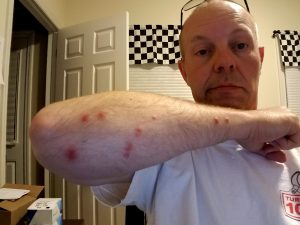